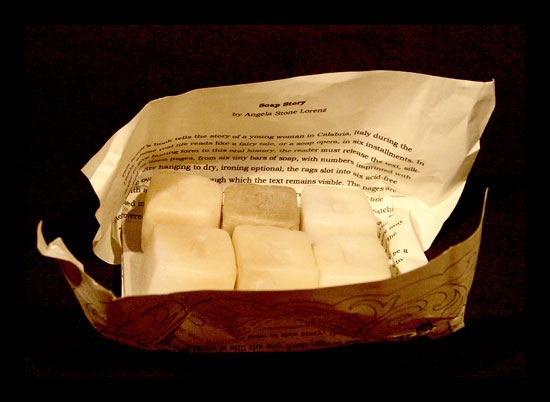 A present, a puzzle and a parable – Angela Lorenz’s work comes wrapped as a gift of soap with both a secret and a story. The colophon itself is printed on a reproduction of a page from a woman’s magazine, October 1956, titled “Mani di Fata” or Hands of the Fairy.” The magazine was found abandoned in Calabria, not far from the town in the story. The reproduction is an iron-on design for embroidery of a “tableware decal.”

Says the artist: "This ...book tells the story of a young woman in Calabria, Italy, during the 1950’s, whose real life reads like a fairy tale, or a soap opera, in six installments. In order to give lasting form to this oral history, the reader must release the text, silk-screened on linen pages, from six tiny bars of soap, with numbers imprinted with lead type. After hanging to dry, ironing optional, the rags slot into six ...pages with oval die-cuts, through which the text remains visible."

Because the Jaffe Collection purchased two copies, we have both a fresh set of soap cubes and the finished book, giving a new meaning to the saw “women’s work is never done.” It is full enough of visual and narrative puns and pieces to keep any interpreter busy.

The story tells how a young woman, banished from a private washing trough because she is a poor unmarried mother, ends up as the wife of a doctor and the wealthiest woman in the town, yet still humble.. The soap can yield up its story only by hard washing: “The process confronting the reader reflects that which the protagonist must face, allowing the young woman to wash her hands of her sorrows.”

“Wrapping up packets in recycled newspaper and twine is still the way the fresh eggs or handmade soap travel from household to household.” All of it, the soap, the poverty, the motherhood, the marriage, the washing, the hanging-to-dry, (the optional ironing!), the rags, the woman’s magazine, the box label, the fairy, the embroidery, and finally the work: the concept, the symbols, the story-telling created by the artist, all are within the special purview of women, honored by this book artist.