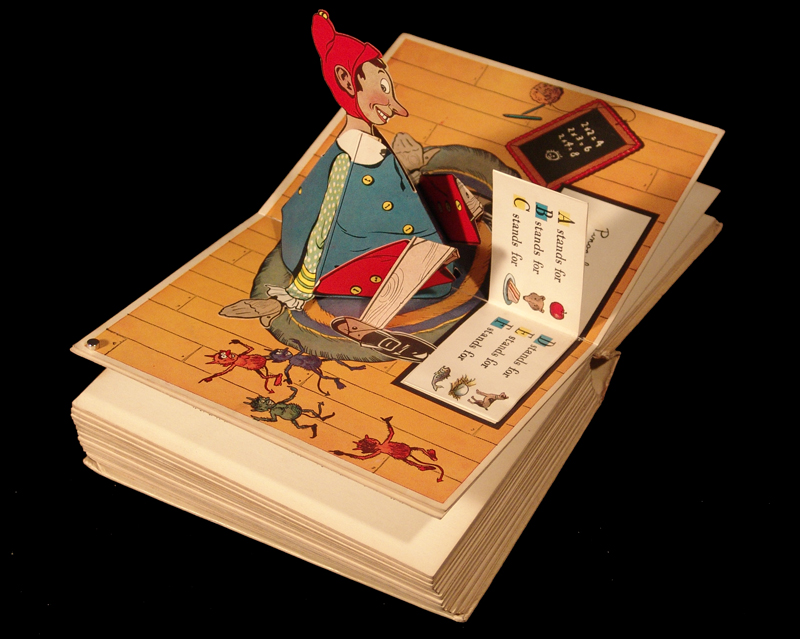 In 1933, “Nonna” gave to Jerry “with love and kisses” a book published the previous year in which Harold Lentz (without crediting Carlo Collodi the original author of the famous stories) re-tells Pinocchio tales and illustrates them with what we now call ‘paper engineering,’ but which in its time delighted children and grown-ups under the name ‘pop-up.’

It is fitting that Nonna (Italian for grandmother) chose for her grandson a book first published in Italy in 1881, about a wooden puppet whose name means "pine eyes," a popular nickname for someone prone to exaggeration and telling tall tales. Arthur J. Williams has recently given to the Jaffe Collection a group of pop-up books of which this is a fitting example . It joins several other “Pinnochian" items in the Collection, including a wooden doll, a trade edition illustrated by Jim Dine, and a grand Italian version in the triangular shape of Pinocchio’s nose.

The Lentz volume is entirely printed on thick stock with many witty black-and-white illustrations, and four brilliantly-colored pop-ups, all showing Pinocchio in trouble. (Walt Disney’s 1940 film of Pinocchio is the darkest of Disney’s famous animated features.) In the first, which shows Pinocchio at school (how he hated school!), there is even a page-turning alphabet primer at which Pinocchio gazes in horror.

The second illustration shows a fairy, “the beautiful Child with blue hair,” outside a house where Pinocchio is being kept a prisoner. She releases him from his tormentors and promises to make him into a real boy, which has always been his dream. However because becoming real means accepting responsibility Pinocchio runs away and, having grown the ears and tail of a donkey, is made to perform in a circus. The third illustration shows the circus with a central donkey figure labeled "Pinocchio."

In the final pop-up, Pinocchio and Gepetto, his carver-father, are together in the belly of a large fish from which Pinocchio saves his father, and having done a magnanimous deed, is finally worthy of becoming a real boy.

The proliferation of books about Pinocchio is a testament, of course, to the enormous attractiveness of this redemptive tale; the addition of this American interpretation of the Italian tale to the Jaffe Collection is a testament to the magic of pop-up. Its dimensionality literally raises the story off the page and brings the book (like the puppet) to life.