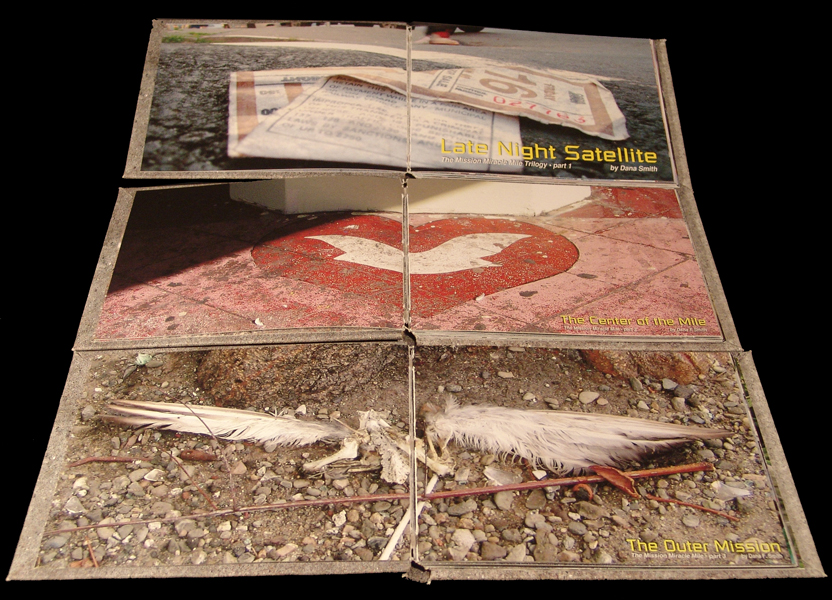 Come with me and Dana Smith to play an extraordinary game of Exquisite Corpse in my old neighborhood, San Francisco’s Mission District. Exquisite Corpse is a game originally played by European surrealists in the early part of the last century. There are written and pictorial forms of this game, but both involve the same principle: that the players each make a contribution to the whole without having knowledge of any of the other players' contributions.

Here we have three books with a variety of choices with which we can make a whole new image every time--ears of corn from an outdoor vendor, three guys raising a giant hamburger sign, two discarded bicycle tires--the books give you Mission Street’s vision of another game: animal, vegetable mineral. The brilliant colors give immediacy to any combination you make: the Mission district may be seedy and crowded, but it is vibrant, full of life and the detritus of life.

Books without words contain ‘prompts’ that may lead a reader/viewer in unexpected directions: they take advantage of myriad reader responses that their creator cannot know. Dana Smith, however, is not just playing a game (or two games) with us. He manages to guide our thinking by depicting the ethos of the Mission, and even some of its history in the variety of images he chooses, and in his inclusion of the Mission by time in Late Night Satellite and by location in the other two volumes. The concepts of Where and When in the Mission are important ideas, as Wikipedia tells us:

Weirdly, almost prophetically, both the library’s heading and the copy of the book in the Jaffe Collection (#2 of an edition of 100) have become sharply ironic: just as Brooklyn’s Gowanus canal has been named a Superfund cleanup site because of its deterioration, the latex pages of the book itself are deteriorating. The malleable lead covers still reflect the homely grayness of the canal waters, but I fear to separate some of the historic postcards from the decaying interleaved latex sheets.

Although gentrification during the 1990s and 2000s shifted the demographics and culture of the neighborhood, to account for a large younger, more White American, the Mission r emains the cultural nexus and epicenter of San Francisco's and to an increasingly lesser extent, the Bay Area's Latino, Chicano, Nicaraguan Salvadorian, Guatemalan, community. While M exican, Salvadorian, and other Latin American businesses are pervasive throughout the neighborhood, residences are not evenly distributed. Most of the neighborhood's Hispanic residents live on the eastern and southern sides. The Western and northern sides of the neighborhood are more affluent and less diverse.

I have always liked the implications in the name of the district and the street: it’s named, of course, for the original Mission Dolores on its far western border, but it also implies a mission to the poor and displaced, the transient and the immigrant for whom it remains a locus. Several images in these volumes record that history too.

I was going to write now about another gorgeous San Fran book in the collection Watch Your Step in which Dana Smith has collaborated with two other artists, but on Smith’s website you get to see the whole book.

That’s not as good as a visit to the Jaffe Center, but it will have to do.