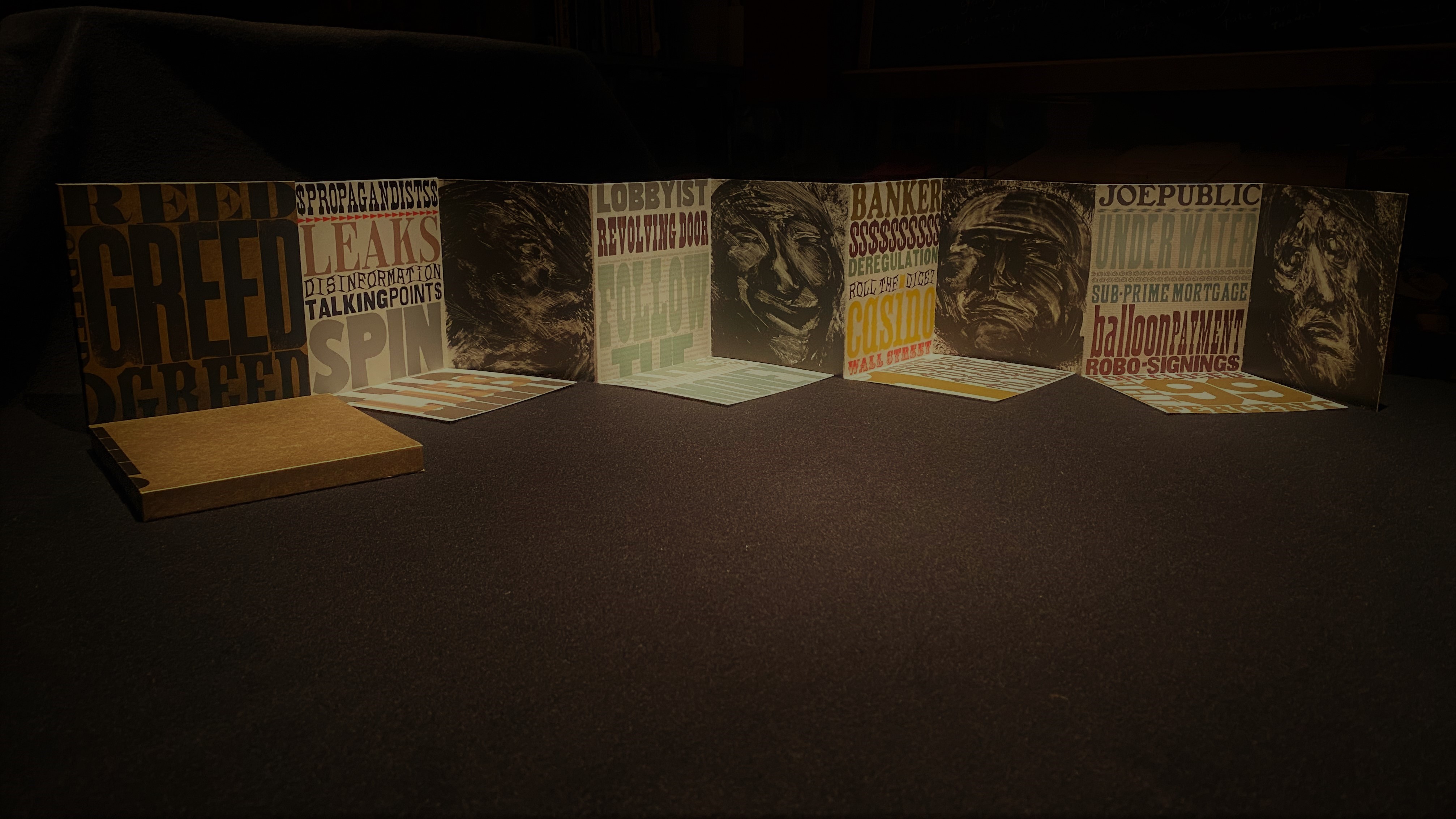 by Janus Press of Vermont

“Remember, remember, the fifth of November….”, was a poem, or ditty, created to remember the plot of Guy Fawkes to blow up the King of England and the Parliament. In a similar vein, Greed by Claire Van Vliet of Janus Press, is a work of art meant to remind us of a significant time much closer to the lives of Americans. Specifically, Americans living in a free market financial system which many don’t properly understand and the terrible price we paid for this ignorance not that long ago. The English poem, with its historical antecedent, represents a singular and more bombastic event in the annals of history. Still, it’s with this same purpose that Greed sets out to anchor those who behold its artistry in the time and remembrance. So that the pain that was, should not be duplicated.

At a glance the book is beautiful, eerie, shocking and loud. It screams at the viewer to take notice and not gloss over the nature of its contents. Made in four parts, accordion bound with four embedded 6.5” x 7” fold downs designed for the purpose of creating compartmental spreads for each of the four subjects, the work is both sequential in nature and distinctly exhibitory. Each section with unique letterpress design, unfolding into a display set against lithographic printed portraits which seem inspired by the dire and cynical nature of Francisco Goya’s Black Paintings.

The overarching subject, the effects the Great Recession. Greed is a reflection of the financial devastation unleashed in 2007-2008, where at the heart of institutional meltdown was the “American Dream” of home ownership which was being exploited to inflate the housing market through the use of unregulated sub-prime loans. The tremendous individual debt created for homeowners when in a matter of months their home equity, for which they had been dependent upon, suddenly vanished. Equally, those larger financial institutions which had been packaging these subprime loans together into CDOS (collateralized debt obligations) for the purpose of selling them, suddenly began to collapse like a house of cards when the market began to inspect the viability of these CDOS.

Greed delves deeply into the facts leading to this event and the raw emotions gleaned from this knowledge are keenly put on display with printed statements such as, “Figures don’t lie but liars can figure”. It follows these cynical statements with sheer numerical scope, stating that in 2007 there was 10 trillion dollars in regulated banking but even more money, or 10.5 trillion dollars, in unregulated shadow-banking. If you were to run a google search, you will find that as of April 2019 there was already 52 trillion dollars in shadow-banking, or a 75% increase since the Great Recession ended with the only regulatory legislation put in place since that time, the Dodd–Frank Wall Street Reform and Consumer Protection Act, having since been dismantled.

Some, if not most, people equate art to be a creative practice, open and free of constraint. In Greed, however, you can see that the art of activism and awareness has a ruthless cutting edge which is bound by the overwhelming desire to counterbalance the seemingly insurmountable nature of its subject. In short, Greed is a driven, passionate, well designed and powerful book. Let us hope, that we remember this painful moment in time and in this case art will be freed from the constraint of history repeating itself. If that should happen, we must thank Claire Van Vliet, all those at Janus Press and the artists whom have endeavored for the public good before them. Click here for slideshow.