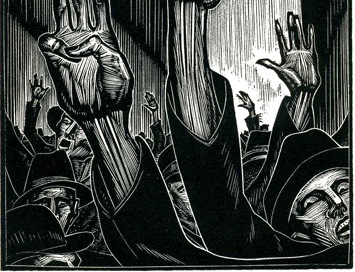 A book of 139 wood engravings with no words, Gods’ Man reflects the collector Arthur Jaffe’s early interest in woodcuts, beginning with acquisitions of works by Leonard Baskin and the book that may be the Collection’s best-known bibliographic treasure, the Cranach Press Hamlet with illustrations by Edward Gordon Craig. Although the Collection has branched immeasurably since that time, the impact of the clean-lined deeply shaded images of this technique still fascinate him.

Ward’s iconic 1929 Art Deco work was the first woodcut novel published in the United States. It became, according to David A. Berona’s text, Wordless Books: The Original Graphic Novel, “an overnight success, selling 20,000 copies in six printings over four years.”

The story concerns the fate of an artist destroyed by greed. His first promising vision of “a city on a hill” with enormous skyscrapers and brilliant light is ruined when his art becomes tainted by money, and his soul by association with thieves and prostitutes. He recovers, nursed back to health by a woman who leads a simple country life. The book ends with a grim vision of his death to which he is led by a masked figure reminiscent of the villains of the books’ beginning.

The careful sequencing of illustrations is crucial to the story-telling – just enough information must be given in each panel to enable the viewer to follow and understand the action. Its artistry is impeccable: the exaggerated expressions of the characters, the contrasts between light and dark and even the changes in perspective contribute to the effect.

This book with its paper-knife-cut pages, this prophetic book reviling the culture of greed, was ironically published in the week of the 1929 stock market crash. Its message is no less potent today as we have once again been fooled by the gods of the marketplace. But in the meanwhile, in the separate world of artistic endeavor, it retains its value and garners another kind of interest.