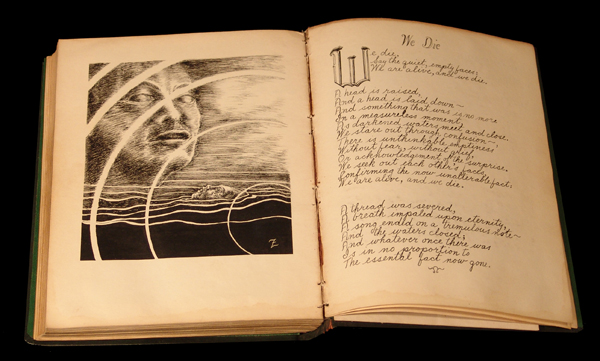 Fragments of a Dream

Part of the magic and the mystery of a collection of books is trying to understand what draws an artist, a poet, a man to make a book, not knowing where it will find a home, or who will see it. The result of one such creative passion has come to rest here at the Jaffe Center. A woman brought the book to Arthur Jaffe, saying it was the work of her deceased brother-in-law. We have no other information except for two enclosed letters indicating that he had twice submitted it, in 1947 and again in 1952, to the publisher Dodd, Mead and Company. Both times it was rejected. According to the letters, the market determines what books reach the public and which are lost; to reproduce this one, the letters say, would have been economically unfeasible.

And yet here it is: A record of countless hours of work and thought. It is entirely handmade, its pages sewn into signatures and bound in calfskin with its title and author’s name embossed in gold. It is entirely a work of imagination and enormous effort: Poems to a single lost love and ruminations on life experience with multiple, often stunning, illustrations.

Compared to other books in the Jaffe Center’s collection, this is a humble example – it looks unexceptional, and its artistry, although exquisite in many places, is no more remarkable than that of many others. Its poems, collected as ‘Love Lyrics’ and ‘Wayside Gleanings’ are commonplace romantic poetic efforts, sometimes mourning lost love, sometimes extolling heroic acts, sometimes plainly hortatory.

But the maker’s dedication, his determination to set down in his own careful hand fair copies of his poems and to illustrate them painstakingly with pen, ink and marker, to illuminate with great delicacy and imagination the first letters of each offering, makes Fragments of a Dream emblematic in a way of what books are about – the unwavering resolve to present and preserve experience and reflection. Set among the more radiant gems of this collection, E.V.Zukas’s work reminds the viewer that everywhere there is private human striving towards this ultimate goal.