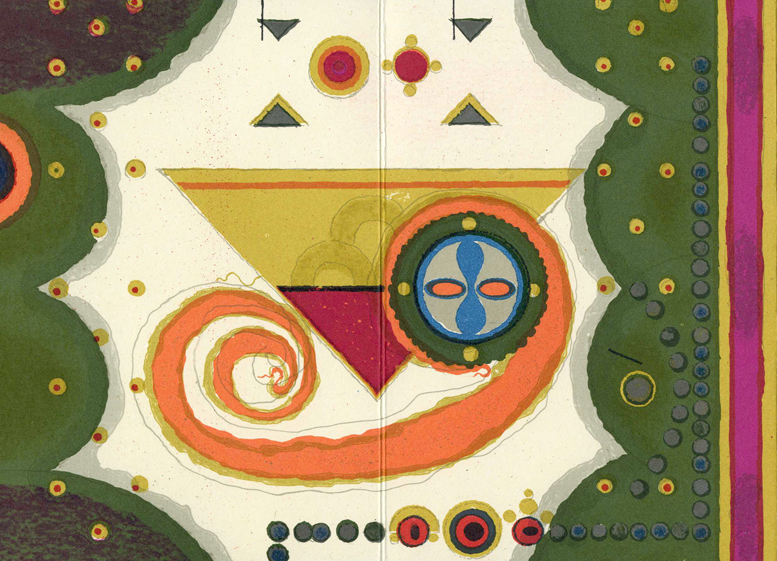 Arthur Jaffe tells me that children are immediately adept at decoding the story of Cinderella, from a fairy tale by Charles Perrault, as Warja Lavater tells and recreates it in one of these volumes from Maeght.

Inside the front cover a folded sheet reveals the artist’s symbols: for the fireplace and ashes, there is a stylized fireplace surround with an ashy gray interior; for Cinderella herself, a curvaceous blue figure eight in a circle; and most elegantly, for the Prince, an inverted triangle in red and gold. I like the evil stepmother and stepsisters who are variations on cats’ eyes in red encircled by black. The Good Fairy is related, but with a difference. She is a black circle surrounded by a corona of (pumpkin?) orange. The King and Queen are a sweet amalgamation: they are circles like the other important figures, but the royal colors connect them to the prince.

In accordion fashion, the book folds all the way out to expose the entire tale, or it can be read page by page as if it were bound conventionally. Here’s how I interpret the symbols.

Cinderella sits alone by the fireplace in a bleak setting – light breaks in as messengers from the castle arrive and are greeted by the evil ‘Steps.’ The royal invitation, indicated by gilded decorations, includes even the ash-covered Cinderella Through the forest goes the royal procession followed by the Stepmother and then by Cinderella at a respectful distance. In the forest appears a dark circle surrounded by radiance which shows itself at last as the Good Fairy, who outfits Cinderella, in a magnificent swirling robe and two radiant slippers, leaving her ashen aura behind.

Here comes Cinderella into the palace, surrounded by royal guards and guests. She is presented to the Royal Family, while the evil Steps insinuate themselves into the surrounding court. Ah, writ large, Cinderella meets the Prince, and they dance. But the shadow of the Good Fairy hovers and Cinderella must run back down the castle stairs to her bleak fireplace, losing one slipper that glows behind her in the dark. Poor Cinderella. She sits alone among the ashes, even her remaining slipper dulled by the scene.

The wicked family returns, the Stepmother sizzling with rage, (I may need a child here – is that what you see?) but in the next panel, they welcome the Prince bearing the slipper with his retinue helping him search for the mysterious owner.

The Prince tries the slipper on the big wicked Steps one after the other, while Cinderella cowers in the dark with the other slipper. Finally the Prince notices her, and in a grand manner, all but obliterating the wicked family, Cinderella produces the other slipper, which exactly matches. Wearing the slippers, she goes off with the Prince. The wicked Steps follow, seething with disappointment and anger. The Good Fairy once again produces the magic gown for Cinderella, and in it she is united with the Prince.

In the final panels, the happy couple goes up the palace stairs to rule over their large dominion. The slippers lie forgotten, and Cinderella herself is now more central than her trailing garment. But wait, among the subjects at the bottom, what’s that ashy blob? It’s the wicked Stepmother, burning up!

The story may not be exactly as you remember it – no glass coach or mice-into-horses, for example – but the book lies here very much open to interpretation, and to a continual ‘finding’ of meaning. I feel well rewarded for my search.