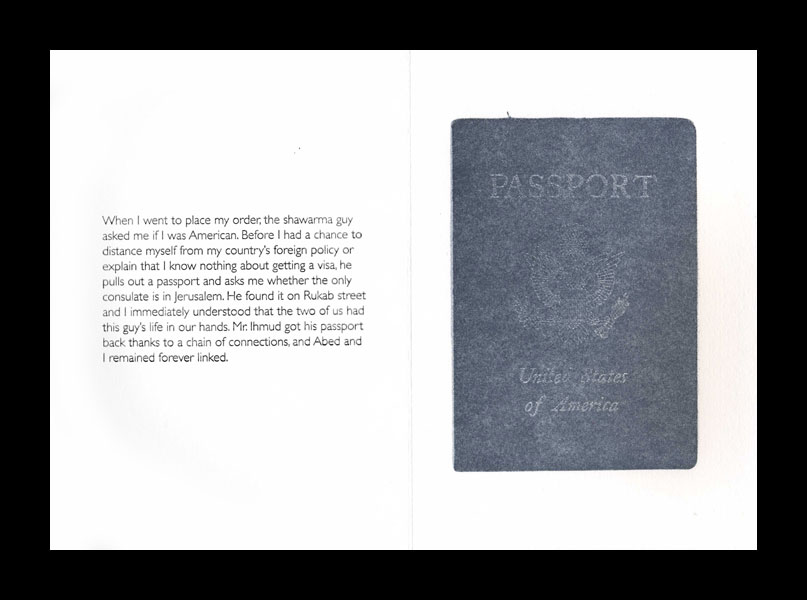 Printed on heavy stock, folded into an accordion binding, glued into a cardboard cover, this small book ironically projects simplicity both in its bland aspect and its episodic text. Toby Millman’s illustrations are embossed reversals of what apparently began as papercuts, incisions that have now been impressed so that they appear in a backwards reality. The seemingly unrelated snippets of text suggest journal entries from a woman of American Jewish background who is visiting Palestine, learning Arabic and recording her experiencein photographs and drawings that will be turned into the graphic medium of the book.

By collecting, by choosing, by organizing: as much by what is left out by as by what is included, Toby Millman makes her statement about Palestine. Except for a few references to eviction of Arab populations in 1948, the book is ahistorical, that is, there is no mention of what has led to Israel’s creation of armed border crossings or the airport security she describes. When she tries to make a joke of Jewish incursion: "After changing into my swimsuit, I returned to the beach to find Salim lying on my towel. I said to him, 'just because my grandparents took your grandparents’ land doesn’t mean you can take my towel.' He said, 'Why is it always the same thing with you Toby?'"

Millman makes clear her sympathy with the Palestinians; at the same time, she captures the Palestinians' not always sympathetic view of Toby Millman. The positive valence of her opinion is balanced, even contradicted, by the lack of cohesion in the manuscript, the unidentified characters, and even the unstated and therefore unclear purpose of her presence in that place. Her reactions are sensitively felt rather than intellectually considered; they are come from the heart, not the head.

‘[This book] was letterpress printed during an artist residency at the Oregon College of Art & Craft in Portland between August and December of 2008. The title, Access & Closure, and the cover images have been drawn from maps produced by the UN Office for the Coordination of Humanitarian Affairs for the occupied Palestinian territories.’ The Jaffe Collection book is number 5 of an edition of 50. Click here for slideshow