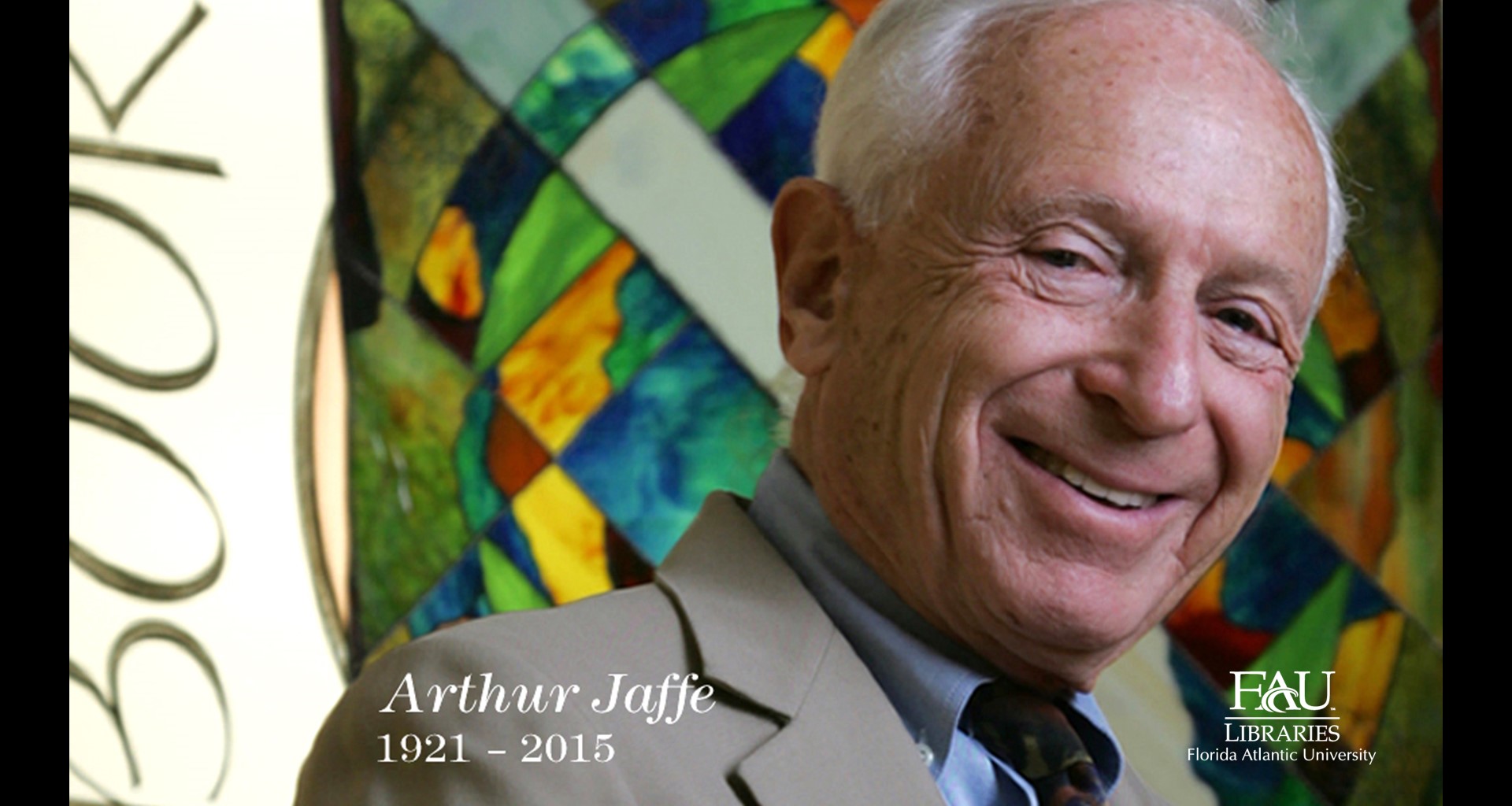 Arthur loved a good New York Times obituary. For years he would read them and share with me the ones he liked best. A couple of years ago he asked if I would write his and I said I would. Turns out he wanted to read it ("You don't always get what you expect, but you do get what you inspect," he would say), but I wrote it just recently, in the days after his passing. I suspect he would read what I've written, then take off his glasses and ask, "I did all that?" And I would say, "You did. You're a pretty amazing guy."

Arthur Jaffe was not a book artist, but his legacy in the world of hand papermakers, letterpress printers, fine binders and artists who work in the book medium is perhaps just as great as any of the more recognizable names like Dard Hunter or Bruce Roger or Kim Merker. Arthur was, at heart, simply a man who loved books.

The book collection he built together with his late wife, Mata, became the foundation for the Jaffe Center for Book Arts at Florida Atlantic University in Boca Raton, Florida. The Jaffes gave their collection of 2,800 books to FAU in 1998, and in 2000 the Jaffe Collection opened to the public as a research collection for artists' books and the book arts. Arthur and the university continued to grow the collection, which now numbers about 12,000 items. It is one of the most extensive collections of its kind.

Arthur Jaffe died on Sunday, January 25, 2015. He was 93. He died peacefully at his residence in Delray Beach, Florida, after a short illness. His legacy is the Jaffe Center for Book Arts, which, as it so happens, almost never came to be. Florida Atlantic University's administration in the late 1990s was not sold on the Jaffe Collection's relevance to FAU's academic programs. In a way, the administration was right. Even Arthur was known to say that the Jaffe Collection was "about nothing and about everything." But Dr. WIlliam Miller, recently retired Dean of FAU Libraries, recalls making a case for the collection the Jaffes were offer to the university's board of trustees. "Give me three books," he told Arthur and Mata, "that really distill the collection to its essence." They did, and he presented them to the board. That presentation sealed the deal.

Staff at the Jaffe Collection began offering book arts workshops in 2002, and in 2007 an expanded Jaffe Center for Book Arts opened, offering workshops and research in the many varied arts of the book: hand papermaking, typography and book design, letterpress printing, bookbinding, boxmaking and paper decoration. The studios of the center include an extensive collection of historic wood and metal types, printing presses that date back to the nineteenth century, Hollander beaters and handmade moulds and deckles for papermaking, and fine binding tools.

If these all sound like fine craft traditions worthy of preservation, they are, but Arthur saw these crafts as a point of departure. His view of the book was a visionary one, and while he was firmly rooted in the traditions of the book arts (when asked which of his collection was his favorite book, he would invariably suggest the 1930 edition of The Tragedie of Hamlet, Prince of Denmarke by the Cranach Press), he was also very attuned to the idea that the future of the physical book lies in the artists' book, a medium in which artists work in the book format. The recurring narrative at the Jaffe Center is that information nowadays is readily available electronically, in a sense releasing the book from its traditional role of carrier of information. And so a typical Jaffe Collection book might have no text whatsoever, or shift into multiple shapes, or be written in a language understood by no one, perhaps not even the artist who created it.

Book artist Maureen Cummins of High Falls, New York, is one of thousands of book artists whose work Arthur collected over the course of his life. There are a dozen works by Ms. Cummins in the Jaffe Collection, and Arthur was a supporting patron of her ambitious 2006 artist' book The Flag Project, a large-scale portfolio edition of screen-printed deconstructions of the American Flag. The book observes the political and social aftermath of the attacks of 9/11. "I think of Arthur as a sort of personal fairy godfather," she said. "He was so supportive of my work and his whole life seemed to be devoted to doing good for other people. He was one of the people who typifies this field, who makes the book arts field a friendly, welcoming and supportive place to be."

Arthur even saw books in tattooed people. Professor Karen Leader remembers meeting Mr. Jaffe just one month after her arrival at FAU in 2009. "He had a project to discuss: something, he didn't know what exactly, about the idea of tattooed bodies as walking books." This was typical of Arthur's creative approach: his inkling of an idea would be the spark that ignited greater collaborative projects. Professor Leader was on board the tattoo project from the start. This she attributes not to any real interest of her own, at the at least, in tattoos. "This was Arthur's creative spirit. It was infectious." The result of their collaboration was a multiyear project called Stories on the Skin, a series of live performances, exhibitions and a documentary connection tattoo culture to book history.

Arthur's work with the Jaffe Center for Book Arts was his career only after retirement. Prior to this, he had been a partner for 30 years in a family business, I.M. Jaffe & Sons, which operated department stores in Pennsylvania, Ohio, and Michigan. He had also worked for the Carnegie Museum in Pittsburgh in the early 1980s as Director of Endowments. Upon moving to Florida, he became a founding director of the Jewish Federation of South Palm Beach County.

Arthur Heilman Jaffe was born in Butler, Pennsylvania, on May 7, 1921, to Max Jaffe and the former Fannie Posner, both immigrants from Russia. The family lived in Butler, where Arthur sold Christmas trees on the sidewalk outside the family store during winter breaks from college, and where he sang in a local big band.

Arthur commanded the Second Mobile Radio Broadcasting Unit in Europe during World War II. This may have been the closest he came to the arts of the book, for part of the unit's mission was the printing of leaflets that were airdropped over Germany and occupied France, printed in German, advising German soldiers of benefits of surrendering to the Allied Forces. He served as an Army Intelligence and Infantry Captain and participated in the Battle of Europe after landing at Normandy. After the war, he joined the Haganah, the Jewish Defense Force, and from 1946 to 1948 served in this capacity in the establishment of the State of Israel. He was married twice: first to Lois Silverstein, who died in 1978, then to Mata Barack Loevner, who died in 2001. He had four children with his wife Lois and was stepfather to two children with Mata.

Upon receiving an honorary doctorate in humane letters from Florida Atlantic University in 2001, Arthur said, "If I was able to do some good things, it was because others were helping me and because I was willing to accept their help. Success is only made possible through cooperation. It is never something that is achieved by one person alone." This philosophy informed more than his interactions with people; it is really the way he built his collection, always trusting his instincts but listening, as well, to the ideas of others. The result is a collection without borders, a collection that expands our views of what defines a book, and by extension, expands our way of looking at everything.