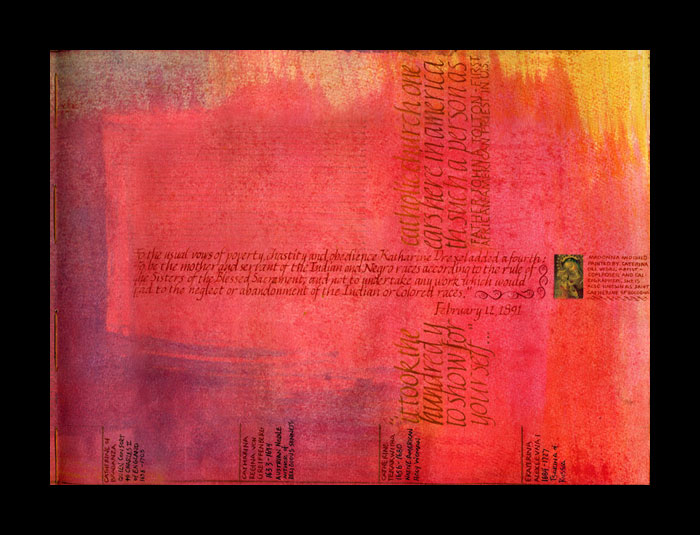 This book earned the First Place Award of the South Florida Calligraphy Guild, the Mata Jaffe Purchase prize, in 2007. Kati Van Aernum is a resident of Key West, Florida and a first-time bookmaker.

From the colophon: “This book is an exploration of my birth name, Kathryn, leading me through ancient and modern history, the arts, sciences and religion. Since its formation in the 4th Century C.E., ‘Katherine’ stands at the top of the list of the most popular female names. If you happen to be named Katherine, you know the ritual we go through when we meet one another. ‘Is your name spelled with a K or a C? Are you an RYN or an RINE? Who are you named after?’ In researching the women for this book, I was struck with how powerful and interesting they all were. However, recalling the saying, ‘Well behaved women rarely make history,’ I am sure that if one were to research other women’s names, they would find equally compelling women.”

The unlettered handmade black cardstock envelope encloses a book with painted wooden covers, and carries a repeated design/symbol in gold. It looks vaguely nautical, like a ship’s wheel, or astronomical figure – something that travels far and leads us on. In fact it is a Catherine Wheel, named for an early Katherine, Saint Katherine (Aikaterina) of Alexandria, d. 307 CE, a Christian martyr tortured on a spiked wheel. “With an angel’s assistance, Katherine’s touch breaks the wheel, hurling spikes into nearby bystanders.”

On the wooden cover of the book, we find a Catherine wheel with wire spokes, and the magic name spelled phonetically, and once inside the book, we are treated to a parade of Katherines in all their permutations beginning with Hecate, queen of witches, with a runic inscription. The book goes on adding Katherine on Katherine, “a name deeply rooted in history, yielding sixty four known hybrids and over one hundred and three varieties, called 'Kathonyms.' There is no masculine form.”

The book takes us through brilliantly illustrated variations; it uses a timeline to call the roll, and presents examples as varied as from a Madonna and child painted by Caterina Dei Vigri (Catherine of Bologna 1413 – 1463) to an anti-Katherine Harris sticker from the Florida Vote Recount of the 2000 U.S. presidential election. There is Katherine geography, sign language, Katherine etymology, movie stardom, reproduced signatures, Katherine strength and Katherine beauty, and finally, in calligraphic perfection, an image of the katydid singing its katydid song.

Every page of the book is compelling. It is the work of an artist, a researcher, a story-teller, a craftsperson, a historian, a humanitarian and an enthusiast. It is indeed a prize-winning work.